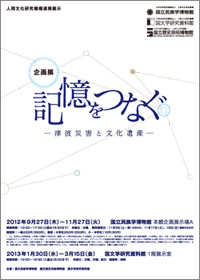 The devastating damage caused by the massive March 11, 2011 earthquake has imposed a severe ordeal upon Japan. The damage, including that to nuclear power plants, is profound and continues to unfold.  The effects of this huge earthquake are still emerging.

With the very survival of local communities still in doubt, the year following the disaster has seen a resurgence of local festivals and offerings of theatrical performances in greater numbers than in ordinary years. The result has been a reawakening of the importance of both tangible and intangible cultural assets to people’s lives.

We see this thematic exhibition as an opportunity to refocus on the work of reviving cultural heritage, rethinking its significance, and, via cultural heritage, ensuring that memories of the earthquake and tsunami are transmitted to future generations and contribute to building a next-generation society. 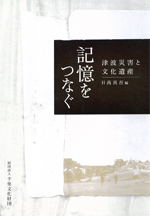 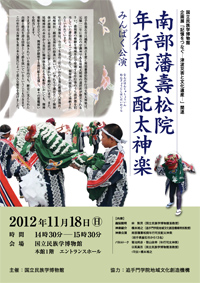 Date: 2:30 – 3:30 p.m., November 18
Location: The Entrance Hall on the 1st Floor of the Main Exhibition Building, National Museum of Ethnology

Performance goals:  The Annual Nambu-han Jushoin Grand Kagura Performance, based in Tadakoshi-cho, Kamaishi City, Iwate Prefecture, is said to have begun in 1699, when a shrine dedicated to Ozaki Daimyojin, the guardian deity of the city of Kamaishi, was constructed. Of the annual events that managed ascetic practices by region in the Morioka domain, the kagura performance was entrusted to the Jushoin temple, which was responsible for the Hei-gun area, and was presented as an offering to the object of worship.

The annual Grand Kagura is performed today at festivals associated with Kamaishi’s three principal shrines, the Kamaishi Grand Tutelary Yakumo Shrine, the Ozaki Shrine, and the Watatsumi Shrine. The kagura performance heralds the arrival of the deities and is placed at the very front of the procession when the objects of worship are paraded through the territories they protect. In the Hikibune Festival, which welcomes the Ozaki Shrine’s object of worship from its main shrine to the local shrine, one float is designated as the gokagurabune, the float on which kagura dancing is performed. It leads the way for the float carrying the deity and is responsible for exorcising evil spirits from all the households in the community.

Even in Kamaishi City, with its rich heritage of many different forms of traditional performance, Grand Kagura stands out for its status, proud history, and pedigree. Grand Kagura was severely impacted by the Great East Japan Earthquake.
For details 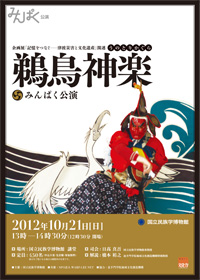 free of charge, no reservation needed (first come, first served).
Purpose: To promote the revival of local culture in a region affected by the Great Northeast Japan Earthquake and Tsunami. This event is related to Minpaku's engagement with the restoration of tangible and intangible culture, and will coincide with the Kioku wo tsunagu (Connecting Memories) exhibition that opens on September 27. The exhibition will show how Minpaku is helping to restore cultural treasures, and aims to arouse interest in this effort. We are proud to present the Shimoheigunfudaimurai troupe performing U no tori shinraku. This is a rare opportunity to see an example of traditional culture from the Sanriku coast, and at the same time support the revival of earthquake and tsunami-affected communities.

This exhibition presents photographic panels created for the Transmitting Memories—Tsunami Disaster and Cultural Heritage exhibition, which opened on September 27. These panels are displayed along with Historic Earthquakes and Tsunamis in Sendai-heiya—Memories of Disasters in Earth and Words, created by the Sendai City Museum, which is located in the Tohoku region afflicted by the March 11, 2011, earthquake and tsunami. Together they introduce the cultural treasure rescue efforts undertaken in the wake of that disaster by the National Museum of Ethnology, the National Museum of Japanese History, and the National Institute of Japanese Literature, all National Institutes for the Humanities. They also introduce the Love Deer Project, through which support was provided for Ofunato City’s Deer Dance Festival. We hope that these exhibits will inspire thought on how we all can participate in relief efforts for the Tohoku region in the wake of this unprecedented calamity.