Permanent Exhibitions "The Culture of The Americas Region: Inuit Art of the Far North." 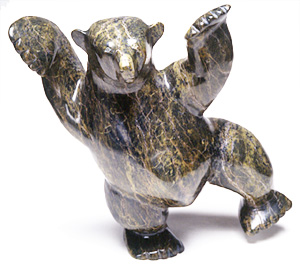 Living in the far north of Canada, the Inuit, since the 1950’s, have been producing stone sculpture, print and painting with the purpose of selling them. These works are regarded very highly everywhere in the world as representative of indigenous art. Inuit art works are displayed in four sections with different themes: Nature, Subsistence Activities, Religion, and Human Relations. From this exhibit, one can discover their world view and their style of expression which are different from ours.

Besides these art works, three unique points should be emphasized. First, Inuit music is played in the exhibition. Dr. TANIMOTO Kazuyuki, a scholar of ethnic music, collected three different cat’s cradle songs from Holman Island, Northwest Territory, Canada, and four different drum dance songs from Arviat, Nunavut Territory. Secondly, an Inuit encyclopedia is exhibited which provides answers to questions about Inuit culture. You can access this encyclopedia from the touch panel of a personal computer. Thirdly, Dr. Rhoda Kokiapik of Avataq Cultural Institute presents a message and pictures, selected by her, of nature and people of the Far North. These are presented in a video which is played on the “From the World” screen in the exhibit. The background music is an Inuit hymn.

Person-in-charge of the exhibition:KISHIGAMI Nobuhiro 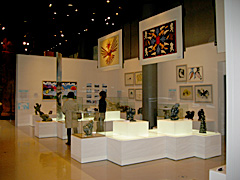 Canada · Inuit
In the vast Far North, from the coast of Chukot Peninsula of Russia to Alaska, Canada and Greenland, about 150,000 indigenous people live. They were formerly called “Eskimos”. The word“Eskimo” in the Cree and Ojibwa Indian languages means ‘one who eats raw meat’. Since, in Canada today, the word "Eskimo" has a negative connotation, it has been replaced by the word "Inuit", which means ‘people’ or ‘human beings’ in their own language. About 45,000 Inuit live in Canada today.